The serf by Roy Campbell

The serf was written by Roy Campbell (1901-1957). Campbell was born in Durban and moved to Europe in his later life. He was a fluent Zulu speaker. Campbell was critical of the white colonial rulers of South Africa because he felt that they were arrogant and would not accept any ideas except their own.

The theme of the poem is power and oppression.
The poet watches a poor farm worker (a serf) ploughing a field. This ploughman is doing harsh work under difficult conditions. He has no power to change his life or job and works patiently and slowly. This man was once the proud warrior of a great tribe that lived on this land. Now he works on land belonging to a rich farmer.
The poet suggests that this worker’s close relationship to the land and his slow patience will mean that one day the land will belong to him again and he will defeat the powerful people who have taken his land. 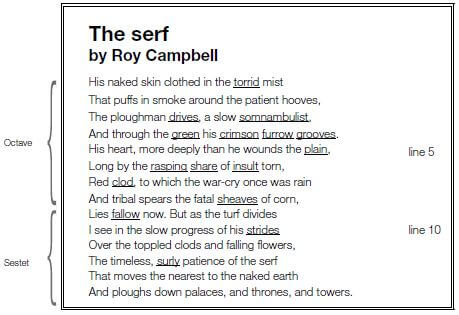 The form of this poem is a Miltonic sonnet (also known as a Petrarchan or Italian sonnet). It has 14 lines made up of:

The octave introduces the problem of the poem as he describes the hard life of the serf. The poet uses a metaphor to describe the ploughman. In line 1, the ploughman is “clothed” in a “torrid mist”. There is so much dust coming from the feet of the animal pulling the plough that it is compared to a “mist” (a cloud) which makes it hard to see the ploughman. The dust is also compared to clothes as it falls onto his skin (line 3).
The poet says that the ploughman is a “slow somnambulist” (line 3). He compares the way the ploughman walks to the way people walk when they are asleep – slowly, as if they are in a dream. This is emphasised by the use of alliteration – the repeated “s” sounds in the words. The “s” sound also appears for emphasis in line 10, “the slow progress of his strides”.
The green grass of the field turns “crimson” (red) as the ploughshare cuts a line, “grooves”, into the earth and turns the red soil to the top of the “furrow” (line 4). The poet’s use of “green” in line 4 is an example of metonomy.

The problem presented in the first 4 lines of the octave continues as the poet explains that, not only is the ploughman poor and doing hard labour, he is also broken-hearted and sad. “His heart” is hurt (“torn”) “Long by the rasping share of insult” (lines 5-6). These insults would have been all the horrible things done to the ploughman and his people – losing his land, being forced to work like a slave, losing his pride.
In two metaphors (lines 5-6), “His heart, more deeply than he wounds the plain/Long by the rasping share of insult torn”, the action of ploughing through the soil is compared to wounding. It cuts the ground and the red soil which is brought up by the plough is the colour of blood. The ploughman’s heart is compared to the ground that he ploughs – his heart has been hurt and wounded by “insult” (line 6). This metaphor compares the ploughman’s heart to the red soil.
Now that his heart is sad, it is empty, without feeling. In line 9 (the first line of the sestet), his heart is compared to a field which “lies fallow now” (line 9) with no crops planted. The poet also uses a metaphor to explain how the ploughman was once a great warrior – the cries of war that were good for his heart are compared to rain, which is good for the “clod” (soil), in which seeds will be planted, and once, instead of “sheaves” of corn (line 8), this man had spears.
The poet uses an oxymoron, “fatal sheaves” in line 8. The word “sheaves” has connotations of growth and health; while the word “fatal” means resulting in death. This may mean that the planting of crops caused the end of a way of life for the warriors who used to hunt for their food.

In the octave, the poet has told us the problem: the ploughman is tired, oppressed, working on land he does not own, and no longer a mighty warrior.
In the sestet, he now gives us the solution to this problem. As he watches the grass (“turf”) cut through by the blade of the ploughshare, the poet has a vision of the future. He believes that the slow, steady, patient “strides” (line 10) of the ploughman, who belongs to the land and to nature (the “naked earth”), will defeat his oppressors and break down their symbols of wealth and power: “palaces, and thrones, and towers” (line 14). The serf will one day be free again and own the land he works on.
The poet uses another oxymoron in line 10 – “surly patience”. Surly means bad-tempered or rude; and seems to be the opposite of “patience”, which means to quietly wait and endure what you are experiencing.
Note the alliteration used in line 11: “falling flowers”. The “f” sound emphasises how steadily and certainly the serf walks forward — towards making history turn to favour his people again.

In the octave, the tone is despairing and depressing as it describes the hard labour and losses of the serf. The tone changes to become more urgent and hopeful in the sestet.
The mood of a poem is how it makes the reader feel. How does this poem make you feel? For example, happy, sad, angry, or indifferent.

Summary
The serf by Roy Campbell

Refer to the poem on page 69 and answer the questions below.