The birth of Shaka by Oswald Mbuyiseni Mtshali

The birth of Shaka was written by Oswald Mbuyiseni Mtshali. Mtshali was born in KwaZulu-Natal in 1940. He travelled to Johannesburg as a young man of 18 and many of his poems are based on life in Soweto. He has won many awards for his poetry and was one of the first black poets to be published in both Zulu and English.
Some of his poetry criticises the way black people were forced to live during apartheid, but other poems, such as The birth of Shaka, are intended to remind black people of their proud culture and history.

The theme is the power of African culture. It is something Africans must feel proud of. The poet praises Shaka’s power and strength as well as his wisdom. The poet’s intention was to remind the Zulu people of their proud heritage at a time when they were being oppressed and made to feel worthless during apartheid.

This poem is a modern praise poem or izibongo.
It has six stanzas. They all have different line lengths and have no rhyming words.

The lion is known as the “King of the Beasts” because of its strength, fierceness and power. It is also a dangerous animal.
The metaphor comparing the cry of baby Shaka to that of a baby lion tells us that he was born to be a powerful, fierce and dangerous leader. The metaphor also tells us that his cry was so fierce that it tore the neck of its mother, the lioness (line 3).
This fierceness is a contrast to how a baby would normally behave towards its mother and may foreshadow how fierce Shaka would become later. It may suggest that Shaka was aggressive towards his mother, Nandi, because his parents were not married and he grew up without a father. For example, Shaka’s behaviour as a baby gives us a clue to how he will behave when he is a grown man.

This metaphor tells us that Shaka was not just an ordinary person but someone special, whose nature was made by the gods, which means they gave him some supernatural powers, beyond ordinary human life. In the metaphor, Shaka’s blood is being compared to something specially cooked by the gods.
“Passion” (line 8) refers to very strong feelings such as love or hatred. If you are passionate about something you are very enthusiastic about it and put great energy into it. This metaphor tells us of Shaka’s energy, enthusiasm and devotion to his work as a warrior (great soldier) and leader, as well as his anger. The poet tells us a “clay pot” (line 8) was used when making Shaka’s “blood boil”, to emphasise his African cultural roots.

A shield is used to protect yourself from injury, which tells us that in war Shaka would not be hurt but, in fact, would defeat his enemies. This metaphor also tells us he was protective of his people and was strong- hearted, meaning he was brave and determined.
We are reminded of how Shaka represents Zulu culture, as Zulu shields were made from the skin of an ox. Notice the alliteration of “foil ... foe” (line 11) which emphasises that he defeated his enemies.

Shaka’s strength did not come only from the gods but also from the ancestors. This is another reminder of African culture, in which the ancestors are believed to guide and help their descendants (family members who come after them). In this metaphor we are told the ancestors “forged” (line 13) Shaka’s muscles. Metals such as iron and steel are shaped by being “forged” – heated until they are very hot and can be beaten or forced into different shapes. This suggests that Shaka was extremely strong, both physically and mentally.
The simile “thongs as tough/ as wattle bark” (lines 14 and 15) also shows how tough and strong Shaka was, as his muscles were like leather and mentally he was strong and determined. The poet then uses another simile, comparing his nerves to the sharp thorns of a syringa tree. In English, if you say someone is “sharp” you mean they are clever and do not miss anything. In addition, sharp thorns can hurt you, so as well as being clever, Shaka was also cruel.

This is a very interesting stanza that shows Shaka’s wisdom, understanding and ability to see into the future.
Shaka’s eyes are compared to “lanterns” (line 19) that light up the darkness. Here darkness suggests that the Zulu people did not know what their future would be. But Shaka was able to see what the arrival of the “white swallows” (line 21) would mean for his people. Swallows are birds that migrate, moving from Europe to Africa to escape the cold winters.
In this metaphor, the “white swallows” refer to the white settlers (both the British and, originally, the Afrikaners), who came from Europe and who sailed by ship to Africa; they would settle and take over what was then called Natal. As well as referring to the settlers, “white swallows” could also remind us of the white sails of a sailing ship, in which the settlers travelled in those days.
Note that up to this point the tone of the poem has been one of admiration and praise. Now the tone is more quiet and prophetic, as if Shaka can see far into the future.

This stanza is Shaka’s “cry” to the two half-brothers who murdered him.
These lines are also Shaka prophesying what will happen to his country in the future. The land will be taken over by the white settlers and the Zulu people will be ruled by them. These lines are the climax of the poem.
The diction (poet’s choice of word) is unusual here when Shaka exclaims, “Lo!” This is an old-fashioned word meaning “Look! See!”. It is used in the old English translation of the Bible, which makes Shaka sound like a prophet.
The tone changes again now. He speaks to his brothers in a tone of strong defiance as he warns them that they will not achieve much by killing him as the land will be taken over by the settlers.

The poem begins with a tone of admiration and praise. In stanza 5, it changes to become more quiet and prophetic. In the final stanza, the tone becomes defiant.
The mood of a poem is how it makes the reader feel. How does this poem make you feel? For example, happy, sad, angry, or indifferent.

Summary
The birth of Shaka by Mbuyiseni Oswald Mtshali 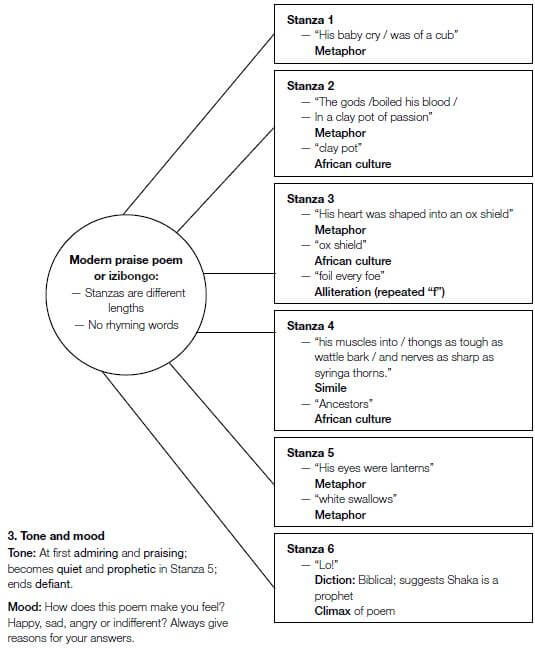 Refer to the poem on page 60 and answer the questions below.