In this section, pay special attention to your grammar and spelling!

The exam for Section C will test your knowledge of language structures and  conventions. This will include:

It will also test your visual literacy skills and your ability to critically analyse  a text so that you understand what is being communicated.
In this section, you will learn the steps that will help you to write the  advertisement, cartoon and language parts of the exam:

You will find examples of how to answer the questions in Section C, based  on questions and answers from past exam papers. When answering the  questions, you must:

Visual literacy is the ability to make meaning of information presented  in the form of an image. In other words, if you are visually literate you  understand what the drawings in a cartoon, or the drawings or photographs  in an advertisement, are communicating to you.
In order to answer exam questions that are based on advertisements or  cartoons, you need to be visually literate because advertisements and  cartoons include both words and images (drawings or photographs).

To be critical when reading, viewing or listening means to analyse the  material so that you can understand what is really being communicated.
When you study advertisements and cartoons, you should watch out for:

The purpose of advertising is to persuade someone to buy a product  (for example food or clothing); or to do something (for example, to stop  smoking or to vote in an election). Advertisements also announce events  (for example, Mandela Day or a sporting event) and inform the public about  jobs or services that are available.

Advertisements come in many forms:

When you study advertisements, think about:

To answer questions on advertisements, you need to:

Study the advertisement below and answer the set questions. 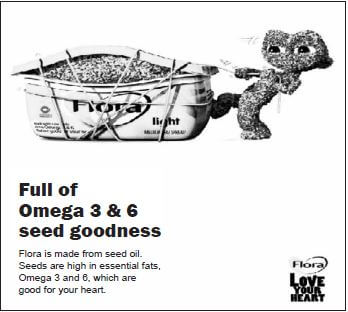 Study the advertisement below and answer the set questions. 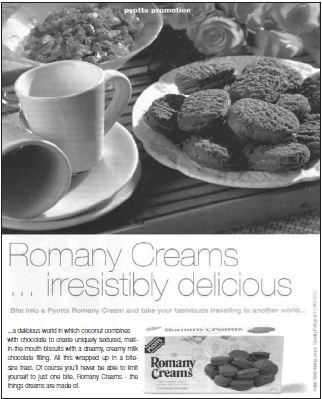 A cartoon is a single drawing, often accompanied by words. A cartoon may  be: 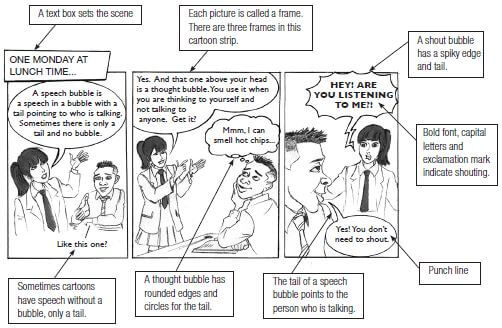 Cartoons may include people, animals or imaginary creatures, or all three.  Cartoonists (people who draw cartoons) may change or exaggerate some of  the features of these figures. For example, people may have huge heads or  skinny legs, animals may wear clothes and talk. A cartoonist commenting  on current affairs may draw a person’s head bigger than it is in real life,  or emphasise his or her nose, his or her glasses, or his or her hair, for  example. This is called a caricature.

When you study cartoons or cartoon strips, think about the following:

Analysing cartoons
To answer questions on cartoons, you need to:

Carefully look at the cartoon below and then answer the questions that  follow.
Note: The name of the dog in this cartoon is Fred.

Read the cartoon below and answer the questions that follow. Note: In this cartoon, the man is Hägar and his dog is Snert. 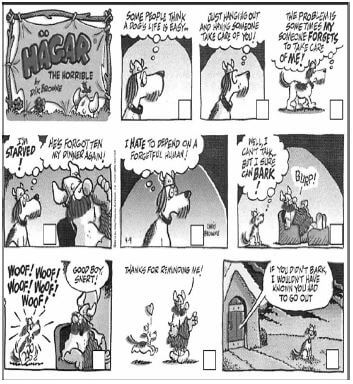 Activity 8
Read the cartoon below and answer the questions.
Note: In this cartoon, Andy is the man in the striped jersey and Chalkie is  his friend.

To answer both  parts of question  3, look at what the  men are wearing and what  is in the background of frame 1.

For more practice on cartoons, go to these past exam papers:

4.1 What is expected from you   in the exam?
In the exam, the cartoon question is worth 10 out of 80 marks for Paper 1.
The exam question will include a cartoon made up of images and words.  You will be required to answer all the questions about this cartoon.
The exam is two hours long and you should spend about 10 minutes on  the cartoon question.

This part of Section C is a challenge to prepare for because the examiners  test your knowledge of many different aspects of language:

In the exam, these aspects of language will be tested by answering  questions based on:

This section focuses on the following aspects of grammar, punctuation  and vocabulary:

5.1 Verb tenses
5.2 Subject/verb agreement (concord) and singular/plural conversion
5.3 Verbs in active and passive voice
5.4 Question tags
5.5 Direct and indirect speech (reported speech)
5.6 Negative sentences
5.7 Combining two short sentences into one longer sentence
5.8 The apostrophe: when and how to use it
5.9 Prepositions
5.10 Vocabulary

The meanings of words; knowledge of different forms of the same   word; spelling of words.

5.11 Language and editing skills in context
5.12 What is expected of you in the exam?

5.1 Verb tenses
Several of the questions require you to know how the different tenses of  verbs are formed (for example, those on question tags, active and passive  voice, reported speech.) It is a good idea to revise these in your language  textbook.
Below is a verb tense table for the regular verb ‘to walk’ to help you to  revise the different forms that a regular verb may take in the active voice.

Worked examples: Verb tenses
Sometimes an exam question requires knowledge of the correct  form of the verb in a particular tense.

In English, all the words in a sentence that have a special kind of ‘connection’  with each other must be in the same form (that is, they must be all singular  or all plural). This special connection is discussed in this section.
If the noun or pronoun in the subject of the sentence is plural, then the  verb must be plural. If the noun or pronoun is singular, then the verb must  be singular.
The subject of a sentence is a noun, a pronoun, or a phrase (a group of  words without a verb) which includes a noun. For example:

The exam will test your knowledge of this part of English grammar in two  ways:

Worked examples: Subject/verb agreement  (concord)
Read the examples from past exam papers below. This will help you to  understand this part of English grammar and to answer questions of this  kind correctly in the exam.

That mother and baby still move in my thoughts. (4)
Correct answer: Those mothers and babies still move in our thoughts.
To answer correctly you need to know the following:

Correct answer: When people are lying they tend to become generally  less expressive.
The singular subject (‘a person’; ‘he’) must become plural (‘people’;  ‘they’) and the form of the verb must agree with the plural subject (‘are’;  ‘tend’).

Activity 9
1. Correct the single error in each of the following sentences:

1.1 His younger brothers walk to their primary school but Sipho  travel to high school by taxi. (1)
1.2 Unfortunately the taxi fares is becoming expensive. (1)
1.3 Sipho is looking for a Saturday job so that he can afford this  higher fares. (1)

2. Rewrite the following sentences in the plural form:

Four steps to change a sentence  from active voice to passive voice:

When you are asked to change a sentence from one voice to the other,  make sure that you keep the tense of the original sentence. For example:

Worked examples: Active and  passive voice
1. Rewrite the following sentence in the passive voice starting with the  given word (or words):

2. Rewrite the following sentence in the active voice starting with the  given word (or words):

5.4 Question tags
In English, questions can be asked in various ways. For example, this  can be done by putting one of the ‘W-H’ words (‘Who’, ‘What’, ‘Where’,  ‘When’, ‘Why’) or ‘How’ at the beginning of a sentence. Another way of  asking a question is by adding what is called a question tag at the end of  a statement.

There are many ways that a sentence written as a statement changes  when a question tag is added to it:

Activity 11
Change the following sentences into tag questions by filling in the blanks.

5.5 Direct and indirect speech
Direct speech refers to the actual words spoken or written by someone.  When someone else uses these exact words, that person ‘quotes’ them.

Direct speech:
Nosipho said, “My family will be going to a soccer match next Saturday.”

Reported speech:
Nosipho said that her family would be going to a soccer match the  following Saturday.
Here are the differences between the two sentences:

Activity 12
Rewrite each of the following sentences in reported speech:

In the exam, you may be tested on your knowledge of how to change a  positive statement into a negative one.

There are many ways that a sentence written as a positive statement  changes when it is written in the negative:

Rewrite each of the following sentences in the negative:

5.7 Combining two short   sentences into one   longer sentence
It is useful to be able to combine short sentences into longer ones, not only  to answer a question in the Language paper, but when you write a report,  a letter or an essay, for example.
Here are some ways to join two sentences into a longer one:

2. Rewrite only the underlined word in the following sentences  in full:

5.9 Prepositions
A preposition is a kind of linking word. Prepositions link nouns with other  nouns, or pronouns. They are used to express several kinds of meaning.
Here are some examples of prepositions:

Hint:
The more you read English, the more practice you will get in using  prepositions correctly.
The preposition ‘in’ is used  with the name of a town or  city. The preposition ‘at’ is  used for a particular place,  for example, ‘at my house’ or  ‘at the club house’.

5.10 Vocabulary
The meanings of words; knowledge of  different forms of the same word; spelling of  words and degrees of comparison
In this section of the exam there are usually some grammar questions that  require you to know:

Here is an example of a prose extract and a picture question from a past  exam paper.

Activity 18
Read the following passage, which contains some deliberate errors, and  then answer the questions.

5.12 What is expected from you in the exam?
In the exam, the language and editing skills section is worth 20 marks out of 80 marks for paper 1
This section is made up of two parts.

For more practice on language and editing skills, go to these past exam papers:

More in this category: « SECTION B: SUMMARY - ENGLISH FIRST ADDITIONAL LANGUAGE PAPER 1 GRADE 12 STUDY GUIDE AND NOTES
back to top