QUESTION 1: MULTIPLE-CHOICE QUESTIONS
Four possible options are provided as answers to the following questions. Each  question has only ONE correct answer. Choose the best answer and write down  A, B, C or D next to the question number (1.1–1.10) on your ANSWER BOOK.
1.1 A boy throws a tennis ball vertically upwards from the ground. At its maximum  height above the ground, its acceleration is …

1.2 A CONSTANT FORCE F is applied to a box, causing the box to move at a  CONSTANT VELOCITY over a rough horizontal surface.

The free-body diagram below shows all forces acting on the box. THE  DIAGRAM IS NOT DRAWN TO SCALE. 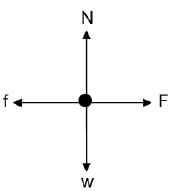 Which ONE of the following relationships is correct?

1.3 An airbag can protect a driver from serious injury during a collision. Which ONE of the following best explains why this is possible? (2)

1.4 The graph below shows the relationship between maximum kinetic energy  (Kmax) of the photoelectrons and frequency of incident photons during an  experiment on the photoelectric effect. 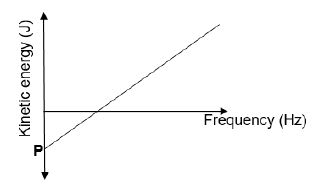 The point labeled P on the graph represents the … of a photon.

1.5 An observer runs towards a stationary sound source. As the observer  approaches the source, its pitch appears to increase because the …

1.6 Two light bulbs are connected across a battery of emf ԑ and negligible internal  resistance as shown in the diagram below.

The battery delivers maximum voltage. If the power of R1 is greater than the  power of R2, which statement is CORRECT?

1.7 A line emission spectrum is produced when an electron in an excited atom  makes a transition from …

1.8 The sketch represents an alternating current (AC) generator that is rotated  clockwise as shown below.

The direction of the induced current in the coil is from …

1.9 Two small, identical positively charged spheres P and Q on insulated stands  are placed a distance d apart as shown below. The magnitude of the force  exerted by Q on P is F.

If the distance is now changed to ½ d, the new force between the spheres is …

1.10 The photoelectric effect is evidence of the fact that …

QUESTION 2 (Start on a NEW page.)
A 4 kg block B, resting on a flat, rough horizontal table, is connected by a light  inextensible string to a 6 kg block A. The string is passed over a light frictionless  pulley in such a way that block A hangs vertically downwards as shown in the  diagram below. 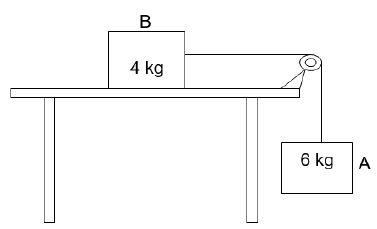 2.1 Write down Newton’s Second Law of motion in words. (2)
2.2 Draw a free-body diagram of all forces acting on block B. (4)
2.3 The kinetic frictional force experienced by block B is 32,53 N to the left. Calculate the magnitude of the acceleration. (6)
2.4 Calculate the coefficient of kinetic friction between the surface of the table and  block B. (3)
2.5 How will the frictional force on the block be affected if the 4 kg block is pulled at  an angle of 30° to the horizontal?
Write down INCREASE; DECREASE or REMAIN THE SAME.
Explain your answer. (3)

QUESTION 3 (Start on a NEW page.)
A ball is projected vertically upwards from the ground with a speed of 18 m•s-1. It  passes the roof of a 5 m tall building on its way up and reaches its maximum height  at B. On its way down, the ball strikes the roof of the building at point A as shown in the diagram below. Ignore the effects of air friction. 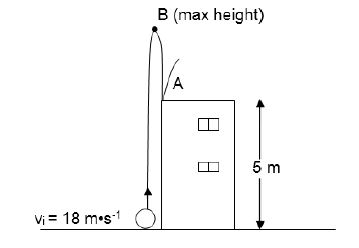 3.4 Sketch the velocity-time graph for the motion of the ball from the ground up  until it hits the roof of the building.
Indicate the following on your graph:

QUESTION 4 (Start on a NEW page.)
A box is held stationary at point A, the top of a plane ABC, inclined at an angle to  the horizontal. The portion AB of the plane is smooth while the portion BC is rough.

4.1 State the principle of conservation of mechanical energy in words. (2)
4.2 Calculate the speed of the box at position B. (4)
4.3 The box experiences a kinetic frictional force of 14,7 N as it moves with a  constant velocity, from B to C, down the plane.

4.4 The angle between the incline and the horizontal is decreased.
How will this decrease affect the coefficient of kinetic friction acting on the  box?
Write only INCREASE; DECREASE or REMAIN THE SAME. (1)

QUESTION 5 (Start on a NEW page.)
A man and a woman each wearing roller skates, stand facing each other on a flat  frictionless horizontal surface. The man pushes the woman and the woman moves  to the right at 4 m•s-1.

QUESTION 6 (Start on a NEW page.)
A police car is moving down along on a flat road at a constant speed and emits from  its siren sound waves with a frequency 346 Hz. A woman sitting next to the road detects sound waves at a frequency that is 50 Hz more than the frequency of sound  waves emitted by the siren as the police car is moving towards her.
6.1 State the Doppler effect in words. (2)
6.2 Explain, in terms of wave motion, why the frequency heard by the woman is  higher than the frequency of the source. (2)
Assume that the speed of sound in air is 340 m•s-1.
6.3 Calculate the speed of the car. (5)
6.4 State ONE application of the Doppler effect in medicine. (1)
6.5 A line in a hydrogen spectrum has a frequency of 7,55 × 1014 Hz when measured in a laboratory. The same line in the spectrum of a distant star has  a frequency of 17,23 × 1011 Hz.
State whether the distant star is moving TOWARDS or AWAY from the earth. Give a reason for the answer. (2)

QUESTION 7 (Start on a NEW page.)
Two metal spheres, M and N, on insulated stands carry charges +QM and -6 nC respectively. The distance between the two charges is 20 mm and P is a point at 10 mm from sphere N as shown below. The NET ELECTRIC FIELD at point P due to  presence of M and N is 5,2 × 105 N∙C-1 westwards.

7.1 Define the term ELECTRIC FIELD at a point. (2)
7.2 Calculate the magnitude of charge QM on sphere M. (7)
7.3 The two spheres were allowed to make contact and moved back to their  original positions.

QUESTION 8 (Start on a NEW page.)
The simplified sketch below represents an electrical motor. 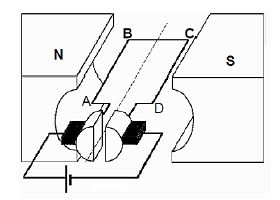 8.3.1 Write down another way in which this turning effect can be increased. (1)
It is intended to produce a maximum potential difference in the electrical motor when a constant current is supplied.
8.3.2 In which position should the coil relative to the magnetic field be  positioned in order to produce maximum potential difference?
Write only PARALLEL or PERPENDICULAR. (1)

8.4 The graphs below shows the output of a generator. 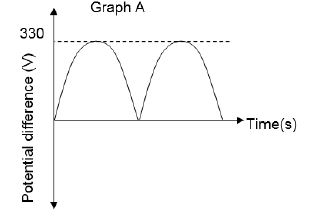 8.4.1 Is the reading indicated as 330 V on the graph above a root mean  square voltage (Vrms) or a maximum voltage (Vmax)? (1)
8.4.2 The generator produces the root mean square current (Irms) of 12 A. Determine the rate at which the generator will transfer energy. (4)

QUESTION 9 (Start on a NEW page.)
In the circuit below, the battery has an emf of 12 V and internal resistance r. The  three resistors and the bulb are connected as shown in the diagram. The resistance  of the bulb is 2 Ω. Initially both switches S1 and S2 are open. Assume that all the  connecting wires and an ammeter A have negligible resistances. 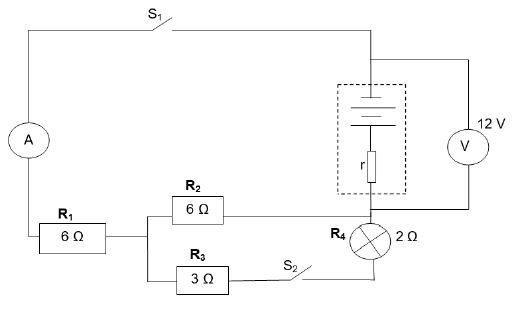 9.2.1 Calculate the power dissipated by the bulb. (7)
9.2.2 What effect will the closing of both switches have on the “lost volts”? Write only INCREASE, REMAINS THE SAME OR DECREASE.
Fully explain your answer. (3)

QUESTION 10 (Start on a NEW page.)
Different frequencies of light are shone onto the surface of a metal. The graph below  shows the relationship between the kinetic energy of photo-electrons and frequency of the incident light.

10.1 Refer to the graph and write down the threshold frequency of the metal. (1)
10.2 Give a reason why no photo-electrons are released when light of frequency 45 × 10-19 Hz is used. (2)
10.3 Calculate the velocity of the ejected electrons when a light with a frequency of  110 × 10-19 Hz is shone onto the metal. (5)
10.4 What effect will an increase in the intensity of radiation have on the velocity of  ejected electrons?
Write only INCREASE, DECREASE or STAYS THE SAME.
Explain your answer. (2)