Download this page as PDF
More in this category: « HISTORY PAPER 1 GRADE 12 ADDENDUM - NSC PAST PAPERS AND MEMOS JUNE 2022
Share via Whatsapp Join our WhatsApp Group Join our Telegram Group

QUESTION 1: HOW DID THE FORMATION OF THE UNITED DEMOCRATIC FRONT (UDF) HAVE AN IMPACT ON THE APARTHEID REGIME IN THE 1980s?

This source is an excerpt from the speech made by Allan Boesak at the launch of the United Democratic Front (UDF) in Mitchell’s Plain, Cape Town in 1983.

The source shows the various organisations affiliated to the United Democratic Front (UDF). 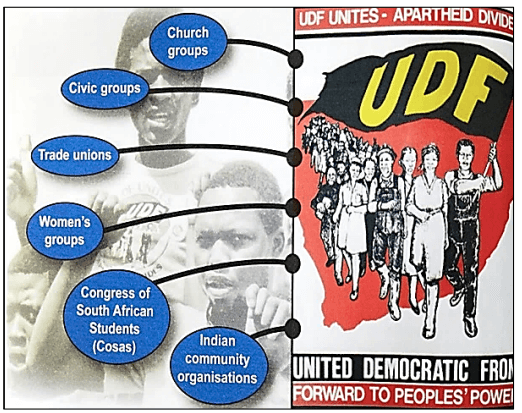 The source below highlights the activities that the United Democratic Front (UDF) engaged in to challenge apartheid government policy in the 1980s.

The extract below focuses on the government’s reaction in repressing the leadership of the UDF.

QUESTION 2: HOW SUCCESSFUL WAS THE TRUTH AND RECONCILIATION COMMISSION (TRC) IN DEALING WITH THE DEATH OF MLUNGISI GRIFFITHS MXENGE?

The following extract focuses on the assassination of anti-apartheid activist and attorney, Griffiths Mxenge, on 20 November 1981.

The following statement was issued by the Amnesty Committee of the TRC. It focuses on the reasons for the granting of amnesty to Dirk Coetzee, Almond Nofemela and David Tshikilange for the murder of Griffiths Mxenge.

This cartoon portrays Archbishop Desmond Tutu and Dr Alex Boraine climbing up MOUNT EVIDENCE. They were tasked to investigate the political atrocities that were committed between 1960 and 1994. 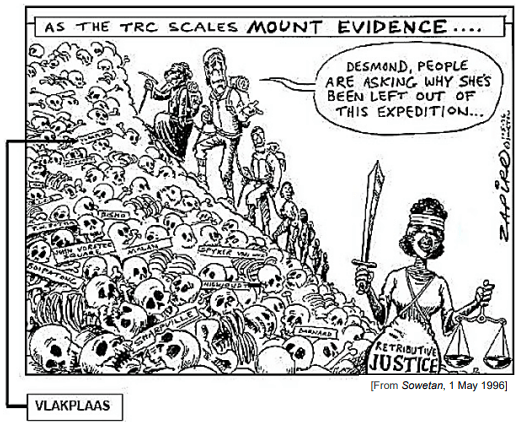 The following report by the South African Press Association (SAPA) outlines the reasons for the Mxenge family’s opposition to the process of amnesty.

More in this category: « HISTORY PAPER 1 GRADE 12 ADDENDUM - NSC PAST PAPERS AND MEMOS JUNE 2022
back to top