Download this page as PDF
More in this category: « GEOGRAPHY RESEARCH TASK GRADE 12 TERM ONE 2022
Share via Whatsapp Join our WhatsApp Group Join our Telegram Group

Valley climate occurs on a local scale and lasts for a few hours. In this section we will focus on:

Effect of anabatic winds on settlements

Effects of katabatic winds on settlements

Katabatic winds lead to the development of the thermal belt (zone of warmer temperature above the valley floor) and a frost pocket (an area of very cold temperatures at the bottom of a valley where frost occurs) in a valley at night. This is shown in Figure 1.4.1C.

Effects of warm thermal belt on settlement and farming

Effects of frost pockets on settlement and farming

1.4.2 Aspect
Aspect refers to the direction in which a slope faces. This determines whether the Sun’s rays will hit the side of the valley directly or indirectly (obliquely). We will focus on how aspect influences the temperatures of north- and south-facing slopes in the southern hemisphere.
In the exam, you may be asked to draw, label or describe how the thermal belt and a frost pocket form in valleys. Learn to redraw and label Figure 1.4.1C.
Let us look at how the Sun’s rays affect slope temperatures in the southern hemisphere:

Figure 1.4.2A shows how aspect influences the temperatures of north- and south-facing slopes in the southern hemisphere.

Activity 2
Figure 1.4.2B (left) illustrates valley climates. Study the diagram and answer the questions that follow. 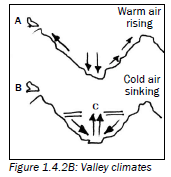 In the exam, you may be asked to draw, label or describe how aspect affects the temperature on a north- or south-facing slope in the southern hemisphere.
Answers to activity 2 continued
1.4.3 City climates
Urban areas (cities) experience a different climate compared to the surrounding rural areas. This results in the formation of a heat island over the city. In this section, we will focus on the causes of a heat island. An urban heat island is when the city has warmer temperatures than the surrounding rural areas.
In the exam, you may be asked how the temperatures change as you move towards the centre of the city. Figure 1.4.3A shows how the temperatures increase the closer you get to the city centre (also called the Central Business District, or CBD). Note also the lower temperatures over the park. 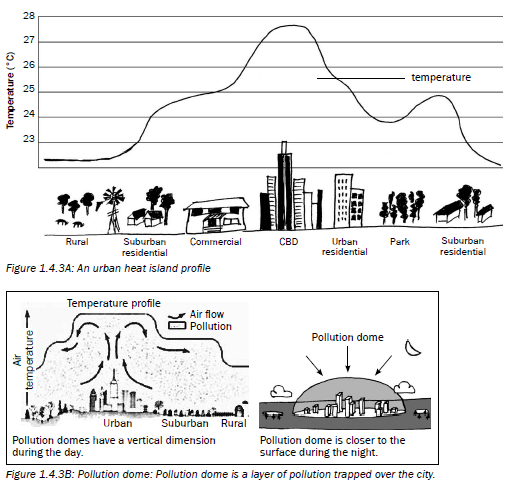 In the exam, you may be asked to say what causes a city to be warmer.
Table 1.2 below lists the factors that cause higher temperatures in the city.

Table 1.2: Factors that cause a heat island
Sustainable ways to reduce the urban heat island effects

Published in Geography Grade 12 Study Guides and Notes
More in this category: « GEOGRAPHY RESEARCH TASK GRADE 12 TERM ONE 2022
back to top