Download this page as PDF
More in this category: « VISUAL ARTS GRADE 12 MEMORANDUM - NSC PAST PAPERS AND MEMOS MAY/JUNE 2019
Share via Whatsapp Join our WhatsApp Group Join our Telegram Group

INSTRUCTIONS AND INFORMATION
In this examination you must demonstrate the following skills:

Read the following instructions before deciding which questions to answer.

ANSWER ANY FIVE QUESTIONS.
QUESTION 1: THE VOICE OF EMERGING ARTISTS
But I am African, and when God made Africa, he also created beautiful landscapes for Africans to admire and paint.
– Mohl
1.1 Compare the artworks in FIGURE 1a and FIGURE 1b by considering the following:

1.2 Discuss any TWO artworks by different South African artists that you have studied who comment on people and their surroundings.
Include the following in your answer: 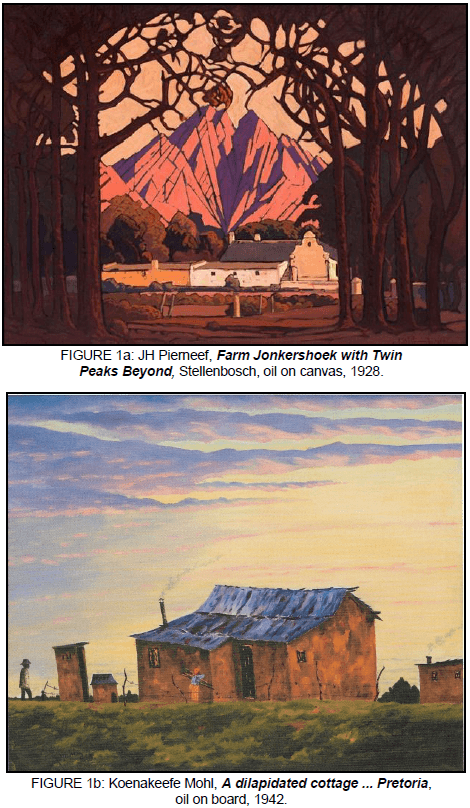 QUESTION 2: SOUTH AFRICAN ARTISTS INFLUENCED BY AFRICAN AND/OR INDIGENOUS ART FORMS
FIGURE 2a is a collaboration between Jaco Van Schalkwyk and sculptor, Allen Laing. The artwork was exhibited in walk-in cubicles placed in the gallery allowing visitors to step into the cubicle and interact with the artworks. This removes the idea/concept of the glass barrier which is used in most Western museums, acting as a protective device between the viewer and the artwork. The artwork, Retroquire xiGubu, focuses on contrasting African figurines with Western functional objects, like kitchen scales. The artwork can also rotate in a circular movement as soon as the viewer presses on the pedal at the bottom of the stand. FIGURE 2b represents a still life painting of African figurines, painted by German expressionist, Max Pechstein.
2.1 Refer to FIGURES 2a and 2b and discuss the following:

2.2 Discuss TWO artworks by different artists whose work expresses their African identity due to the influences of indigenous African art forms.
Use the following guidelines:

[20]
Walk-in cubicles: three-dimensional space that one walks in to
Collaboration: the act of working with another person to create or produce
Mobile: not fixed in one place and can be moved easily 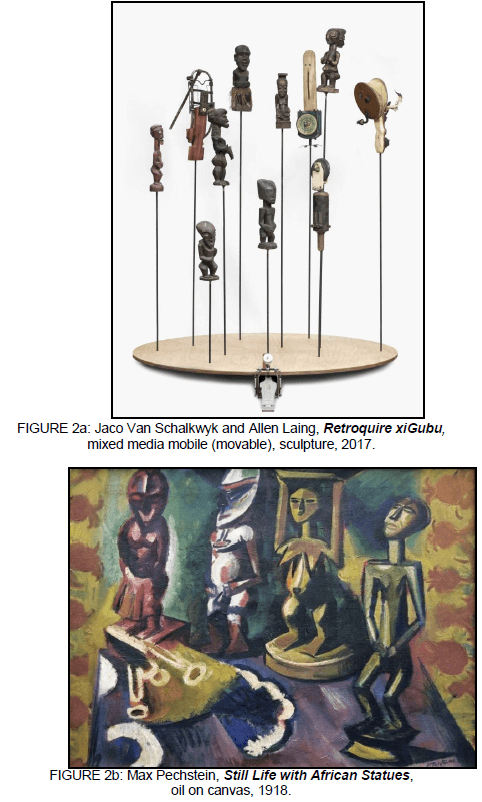 QUESTION 3: SOCIO-POLITICAL ART, INCLUDING RESISTANCE ART OF THE 1970s AND 1980s
Many artists have used Goya's The Third of May 1808 as inspiration in their own portrayals of political murders. In FIGURE 3b Tammam Azzam uses Goya's painting which he projects against bombed buildings, drawing attention to the tragedy of the Syrian war.
3.1 Both images represent a tragedy in the world. Elaborate on this statement by discussing the following:

3.2 Compare how any TWO artworks by different artists have expressed past/current socio-political issues in their work. (10)
[20]
Goya: a Spanish artist from the early 19th century whose painting The Third of May 1808 is based on the atrocities of war
Syria: A war-torn Middle Eastern country 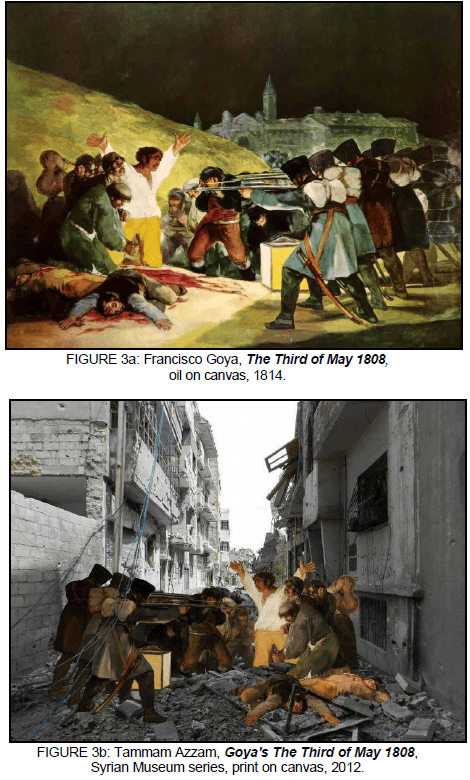 QUESTION 4: ART, CRAFT AND SPIRITUAL WORKS MAINLY FROM RURAL SOUTH AFRICA
Weaving is a traditional craft that has been practised for centuries. Traditionally, baskets were made for functional, religious, and commercial purposes. Today, current artists are influenced and inspired by this traditional craft resulting in new and exciting artworks.
4.1 Discuss the craft of weaving and the influence on new artists.
Refer to the following in your discussion:

4.2 Discuss the works of any TWO craft artists and/or spiritual artists you have studied.
Use the following guidelines: 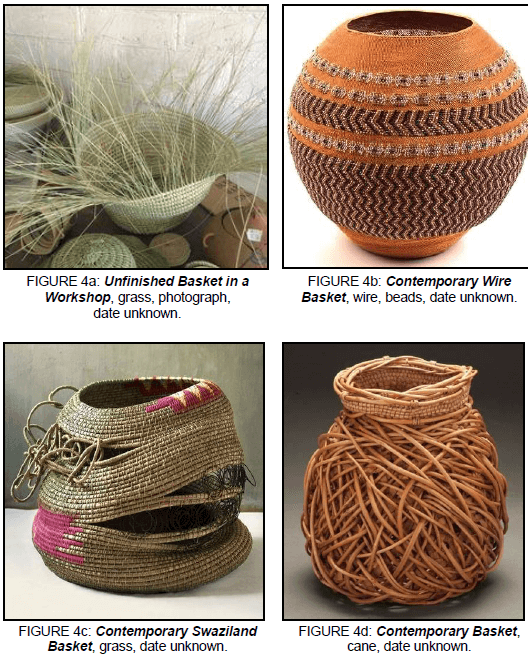 QUESTION 5: MULTIMEDIA AND NEW MEDIA – ALTERNATIVE CONTEMPORARY AND POPULAR ART FORMS IN SOUTH AFRICA
In both FIGURES 5a and 5b animal elements are visible. Frances Goodman is interested in using false nails as a metaphor while Nandipha Mntambo combines the female body with animal skin.

5.1 Analyse FIGURES 5a and 5b by considering the following:

5.2 Discuss any TWO South African artworks that show the use of multi-media/new media in an interesting and new way.
Use the following guidelines: 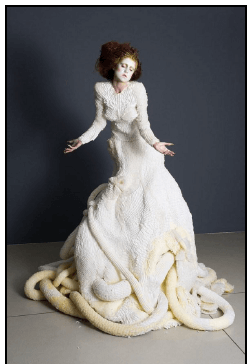 FIGURE 5a: Frances Goodman, in collaboration with Suzaan Heyns, Melusine, false nails and glue moulded on a human figure, 2014.
A still shot of a scene from the performance piece.
Melusine/Melusina is a figure of European folklore, a female spirit of fresh water in a holy river. She is usually depicted as a woman who is a serpent (snake) or fish from the waist down, like a mermaid. 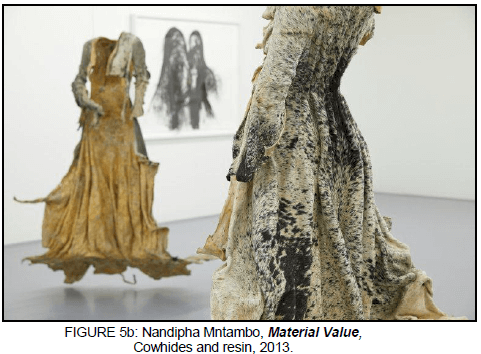 QUESTION 6: POST-1994 DEMOCRATIC IDENTITY IN SOUTH AFRICA
After democracy in 1994, South Africa has experienced many changes, portraying a new identity on all levels of society.
6.1 Discuss why so many South African artists have explored issues of identity after 1994.
Refer to FIGURES 6a and 6b as well as the following:

6.2 Discuss any TWO artworks from different South African artists who address identity in South Africa after 1994. (10)
[20] 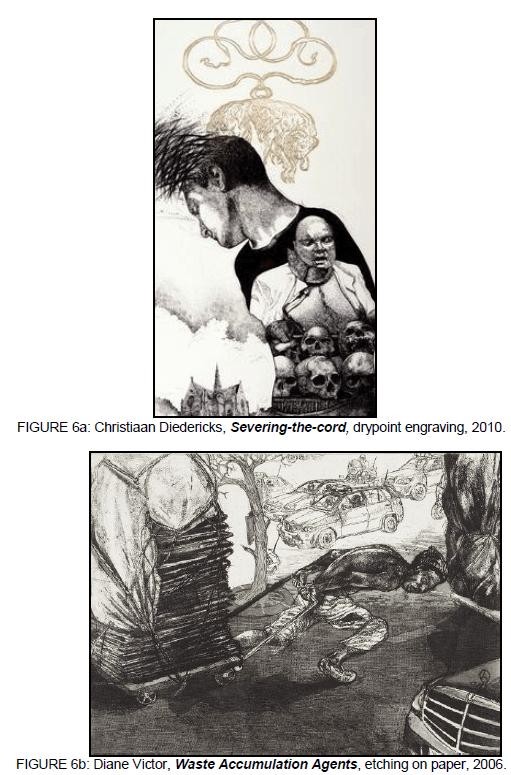 QUESTION 7: GENDER ISSUES: MASCULINITY AND FEMININITY
Jody Paulson is a Cape Town artist whose work comments on gender. He works on a very large scale and attaches felt cut-outs to his boards.
7.1 Comment on how Jody Paulsen addresses gender by referring to the following:

7.2 Discuss the work of any TWO artists whose works address gender and/or the expected roles men and women have to fulfil in society.
Use the following guidelines:

[20]
Felt: a type of soft, thick cloth made from wool or hair that has been pressed tightly together 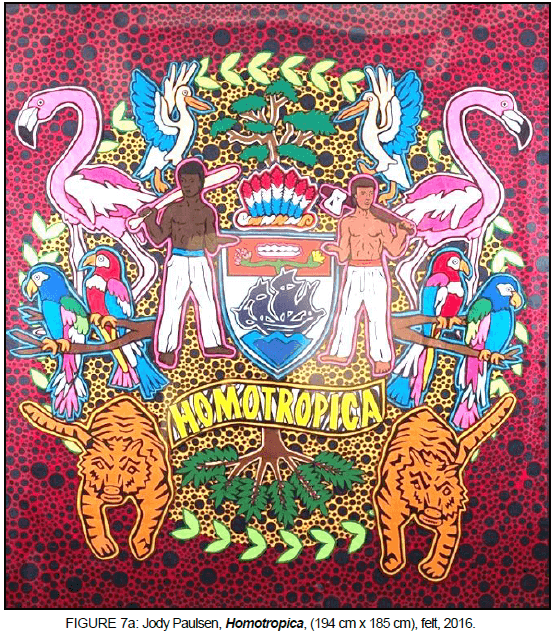 QUESTION 8: ARCHITECTURE IN SOUTH AFRICA
The lack of housing as well as the provision of shelter for the poor, are often the points of departure for innovative architectural designs. People who started building with recycled materials are perceived as pioneers of new designs.
With reference to the above statement and to the structures in FIGURES 8a to 8c, write an essay in which you agree/disagree that change in architecture will contribute to the housing issues we are facing in South Africa. Consider the following:  The significance of recycled material  The advantages and disadvantages of using recycled materials  Sustainability  With reference to the following, discuss any TWO other architectural examples that you have studied which you have found to be truly innovative: o Stylistic characteristics o Building and construction methods o The architect's responsibility to the environment and sustainability
[20] 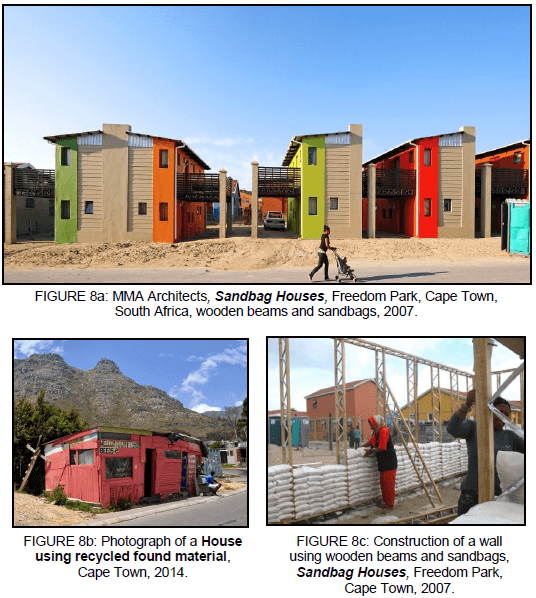 More in this category: « VISUAL ARTS GRADE 12 MEMORANDUM - NSC PAST PAPERS AND MEMOS MAY/JUNE 2019
back to top