Another name for a galvanic cell is a voltaic cell. A galvanic cell has self-sustaining electrode reactions.
Remember
You must remember these basic definitions for electrochemistry:

NB: Remember
We define oxidation and reduction in terms of electron (e–) transfer

The electrolyte is the solution/liquid/dissolved substance that conducts electricity through the movement of ions.

Give one word for the following statements:

Give ONE word for the following statements:

NB
Remember to indicate the charge on the ion

e.g. Worked example 3
Predict the products of the electrolysis of a zinc chloride solution ZnCℓ2(aq)
Solution
3.

c). Electrolysis of water:
Water is a weak electrolyte (weak electric conductor). A small amount of dilute sulphuric acid (H2SO4) is added to water to increase its conductivity. When an electric current is passed through the acidified water, oxidation and reduction reactions take place.

a). Electroplating
Electroplating is the process of putting a metallic coating on an object using electrolytic reactions. 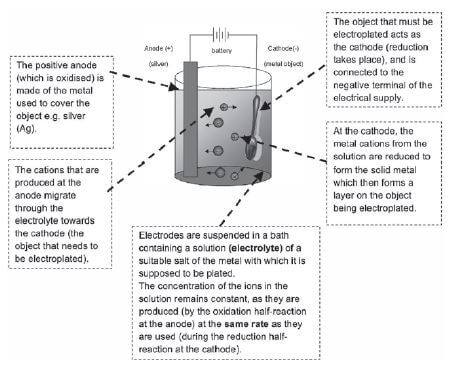 Electroplating is used to protect metals that oxidise easily, by covering them with a thin layer of a metal that does not oxidise easily e.g. chromium, silver or gold. A relatively cheap metal is covered by an expensive metal. Silver is used to cover cutlery — it is too expensive to make a spoon of pure silver, and it is too weak to use — while chromium can be used to cover car parts like bumpers.

e.g.      Worked example 4
An attractive silver appearance can be created by electroplating artefacts (objects) made from cheaper metals, such as nickel, with silver. The simplified diagram here represents an arrangement that can be used to electroplate a nickel artefact with silver.

b) Refining of copper
Copper which is mined is impure and the copper ore can be refined as follows by means of electrolysis:

e.g.      Worked example 5
Impure copper can be purified by the process of electrolysis. The simplified diagram represents an electrolytic cell used to purify copper.

2.2 Give ONE reason why environmental activists oppose the construction of the smelter. (1) [11]

2.2 The production of the large amount of electricity used ✓ enhances the greenhouse effect (or climate change) ✓ OR The process is responsible for toxic fluoride waste OR pollution. (any one) (1) [11]

Remember:
A Galvanic or voltaic cell is a cell in which chemical energy is converted to electrical energy spontaneously. We therefore use a chemical reaction to produce electricity. E.g. standard AA / penlight batteries. 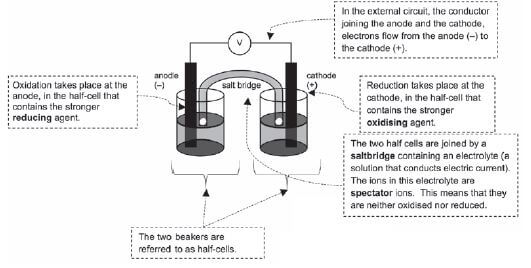 Consider a copper-zinc cell:
A strip of zinc metal is placed in a zinc ion solution. A strip of copper is placed in a separate beaker in an aqueous copper (II) ion solution. These solutions are the electrolytes. As they contain ions which dissociated when the salts were dissolved in water, they are good electric conductors.

NB: Potassium chloride is not suitable for a silver half-cell, because AgCℓ is formed and this compound is insoluble, thus a precipitate will form

NB: The nitrate salts of ionic compounds are very suitable as an electrolyte, since the salts are soluble in water.

The structure of the galvanic cell may also be represented in symbols.
Rules:

5. Which one of the following statements regarding a copper-silver galvanic cell is TRUE?

The Reactivity Series is a list of substances which are arranged in order of their ability to act as reducing agents or as oxidising agents.
The Table of Standard Reduction Potentials lists the standard electrode potentials (E0 values) for various compounds. There are two tables, they are similar, but the entries are arranged in opposite directions. 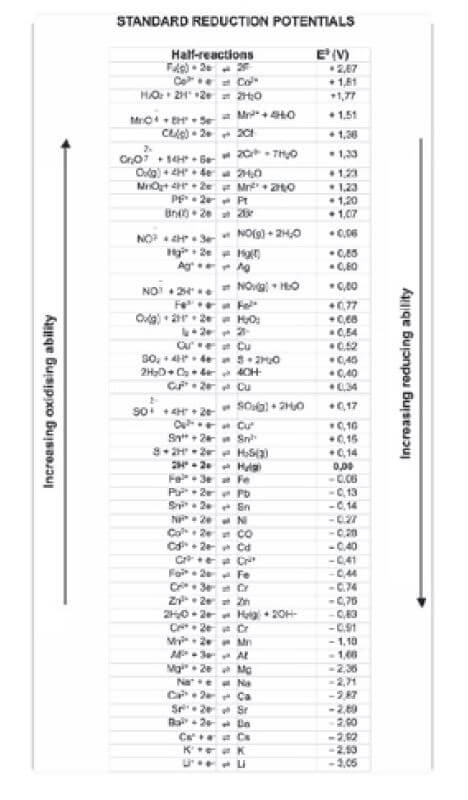 1. State TWO standard conditions under which this cell operates. (2)
2. Write down the half-reaction that takes place in half-cell A. (2)
3. Write down the cell notation for this cell. (2)
4. Calculate the emf of this cell. (3)
5. How will each of the following changes influence the value of the cell’s emf calculated in QUESTION 2.4? Write down only INCREASES, DECREASES or REMAINS THE SAME
5.1 An increase in [Mg2+(aq)] (1)
5.2 An increase in [Pb2+(aq)] (1)
6. In which direction, from half-cell A to B or from half-cell B to A, do cations move within the salt bridge to maintain electrical neutrality? Explain how you arrived at your answer. (3) [14]

Learners conduct an investigation to determine which combination of two half-cells will provide the largest emf under standard conditions.
Three half-cells, represented as A, B and C in the table below, are available.

The learners set up galvanic cells using different combinations of the above half-cells.

The hydrogen gas/hydronium ion electrode has been chosen as standard half-cell. 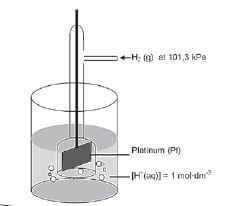 5.10 The emf of an electrochemical cell

Using the Table of Standard Reduction Potentials to predict whether a redox reaction will be spontaneous or not:

NB
When you have to explain the relative strength of oxidizing and reducing agents, write the explanations as follows:

Your correct answer would read as follows:

e.g. Worked example 9
Batteries consist of one or more galvanic cells. A galvanic cell is a combination of two half-cells. John wants to determine which one of Options A or B, shown below, can be used to assemble a galvanic cell with the highest potential difference.

e.g. Worked example 10
Rusting is an unwanted redox reaction. Iron rusts when exposed to oxygen and moisture. The unbalanced ionic equation for one reaction that occurs during rusting is represented below.

Use the Table of Standard Reduction Potentials to answer the following questions for this reaction:

In 1780, Luigi Galvani discovered that when copper and zinc metal were connected to each other and if each free end touched different parts of the same nerve of a frog leg at the same time, the frog’s leg contracted. He called this “animal electricity”.

Tina wants to investigate the effect of the area of the metal plates used as electrodes in a galvanic cell on the emf of the cell. She sets up the following Zn/Pb cell under standard conditions and measures the emf. 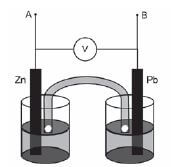 Electrolysis is an important industrial process used to decompose compounds, extract metals from their ores and to purify metals like gold or copper.
The simplified diagram below represents an electrolytic cell used to purify copper.