9.2.1 Changing the frequency and intensity of the incident light 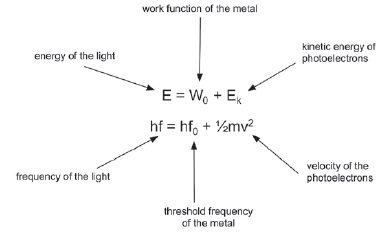 9.2.3 Conditions for emission of photoelectrons

A photoelectric diode in an electric circuit

Worked example 1
Calculate the energy of a light wave with a wavelength of 660 nm.

Worked example 2
A learner wants to demonstrate the photoelectric effect.
He uses a disk of zinc placed on an electroscope.
The work function (W0) of zinc is 6,9 × 10–19 J.

Activity 1
A metal surface is illuminated with ultraviolet light of wavelength 330 nm. Electrons are emitted from the metal surface. The minimum amount of energy required to emit an electron from the surface of this metal is 3,5 × 10–19 J.

Activity 2
In the simplified diagram below, light is incident on the emitter of a photocell. The emitted photoelectrons move towards the collector and the ammeter registers a reading. 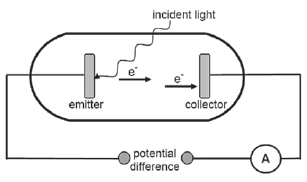 Activity 3
During an investigation, light of different frequencies is shone onto the metal cathode of a photocell. The kinetic energy of the emitted photoelectrons is measured. The graph below shows the results obtained. 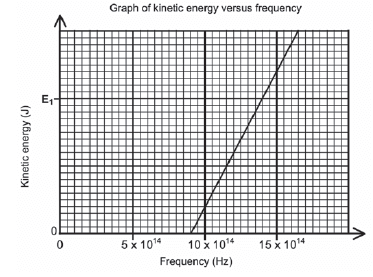