Summary
You must remember:

Potential difference = work done
charge
V = W
Q
E = W
Q
Electric current is the amount of charge per second which flows past a point. It is measured in amperes (A) with an ammeter which is connected in series in a circuit.
I = Q
t
Resistance is a measure of how much a conductor opposes the flow of charge through it. It is measured in Ohms (Ω). A resistor is a component in a circuit that resists (opposes) the flow of current.

7.1 Factors Influencing the Resistance of a Wire Conductor

Definition of the ohm:
A conductor has a resistance of 1 ohm (1 Ω) if the potential difference of 1 volt (1 V) applied across its ends, causes a current of 1 ampere (1 A) to flow through it.
7.2.1 Circuit connection
Circuits can be connected into two ways: Series and Parallel. A series circuit requires the electricity to travel one path that does not split. A parallel circuit allows the electricity to go down different paths (there’s a split in the circuit). See the diagrams below showing resistors in series and parallel for an illustration.

Learn the factors influencing the resistance of a wire conductor. It will help when explaining your answer in an exam.
7.2.2 Comparison between series and parallel circuits 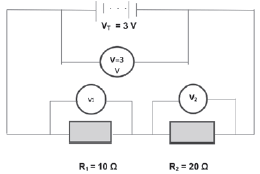 When current flows or charges move through a resistor:

Note: the above applies to incandescent bulbs only (the type with a filament of wire).
Compact Fluorescent Lights (CFL) come in a range of power/wattages but they will simply blow if overpowered by a significant increase in voltage/ amperage.

Worked example 1
In this circuit the battery has an emf of 24 V and an internal resistance of 2 Ω. Voltmeter V1 is connected as shown and voltmeter V2 is connected over the three resistors in parallel. The resistance of the connectors and of the ammeter may be ignored.

Remember: Convert minutes to seconds: x 60 or hours to seconds: x 3600
Remember: Current is the rate at which electric charge passes a fixed point in a conductor.
I ∝ Q
I = Δt
Q
Activity 1
In the circuit below the battery has an emf of 24 V and an unknown internal resistance. Voltmeter V1 is connected across the battery. The resistance of the connectors and of the ammeter may be ignored. When switch S is closed, voltmeter V2 reads 4 V and voltmeter V1 reads 20 V.