Many things in life can’t be predicted with certainty.
The best we can say is how likely they are to happen, using the idea of probability.
Probability helps us to interpret information in many real-life situations, such as:

In all of the above situations, people use probability to decide how likely it is that something will happen

A probability can be described as a fraction, a decimal or a percentage. The probability of any event is given a number between 0 (impossible) and 1 (certain).

The purpose of this scale is to show that there is a continuous range of probabilities. The words are rough descriptions. The numbers give more exact descriptions.
Revise the work on decimals, fractions and percentages in Chapter 1. Remember how to convert between them. Memorise the important ones, for example:
3  = 0,75 = 75%. These are all numbers less than 1.
4
An event has a 50% chance of happening if it is equally likely to happen as not to happen. Tossing a coin is an example: you have a 50% chance of getting heads and a 50% chance of getting tails.
Most things are not as fair as this, though. If you have five T-shirts, three blue and two red, and you take a T-shirt without looking, you have a 3/5 chance of taking a blue one.

When a coin is tossed, there are two possible outcomes:

Words you need to know

The chance of getting T on a coin or 2 on a dice is called the theoretical probability.
When you do a probability experiment, such as tossing a coin a number of times, you are finding the relative frequency of each outcome. For example, if you toss a coin 10 times and you get heads 3 times, then the relative frequency is simply 3 in 10 or 3/10.
What is the chance of throwing an even number on a dice, if you throw the dice once?
This means getting any of the even numbers on the dice. List the correct outcomes: 2; 4; 6.
There are three even outcomes out of six possible outcomes. So the chance is now 50% (which is the same as 0,5 or 1). It is a much bigger chance than throwing only one of the numbers.

e.g.  Worked example 1
Write down the chances of getting the outcomes in the following situations. Write your answers as decimals, percentages and common fractions. 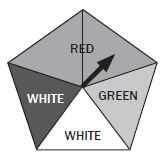 You must give all three.

Fair and unfair games
Do you think games of chance are always fair?

NB
There is no such thing as luck! The chances remain the same.
e.g.  Worked example 2

If we roll a dice the tree diagram would look like this.

There is a 1/6 chance of getting each number.
Let’s take these two situations mentioned above and combine their outcomes. We are going to flip the coin once and throw the dice once. We now have a combined event.
Let’s look at how a tree diagram is used to show combined outcomes.

e.g.  Worked example 3
The tree diagram below shows all the possible outcomes for tossing a coin and then throwing a dice. 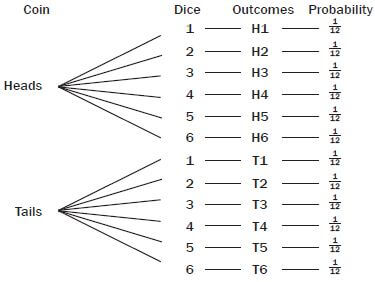 e.g.  Worked example 4
The Moyanas are planning to have three children. A tree diagram showing all possible combinations of boys and girls in a family of three children has been drawn below.

Sandwiches will be prepared for morning tea. The sandwiches are made from an equal number of white (W), brown (B) and whole-wheat (H) loaves of bread. The fillings used for the sandwiches are egg (E) or fish (F), with (M) or without (N) mayonnaise.
An incomplete tree diagram which could be used to work out the different combinations of sandwiches that could be made, is given below. 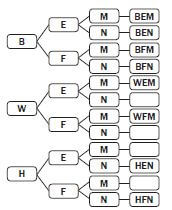 A two-way table (also known as a contingency table) works in a similar way to a tree diagram. We write the outcomes of one event in rows and the outcomes of the other event in columns.
For example, this table shows all the possible combinations for tossing a coin twice.

Can you see that there are 4 possible outcomes?
Each block in the table will show a possible outcome of the combined events. Let’s look at a worked example to understand this better.

e.g.  Worked example 5
Pumeza collects information about the cats and dogs that learners in her class have as pets. There are 30 learners. For each learner, there are four possible responses. She collects the following information below.

Show this information in a two-way

You are putting together a gift pack for toddlers at a day-care centre. There are four possible toys, and a green, red or yellow box to pack them in. The toys are:

Have you ever wondered what it means when the weather report says, for example, it will be partly cloudy with a 20% chance of rain?
The forecast is based on probability.
Meteorologists use special instruments to measure weather characteristics such as temperature, pressure, humidity, etc. They compare the measurements to data they already have about weather patterns. For example, they would work out that for most days with that sort of weather data, it was partly cloudy and there was rain in 20% of the cases.
Their prediction is based on data accumulated over many years.
They predict all aspects of the weather for the day, not just the probability of rainfall.

Tests such as medical screening tests, pregnancy tests, drug tests and blood alcohol tests are very accurate, but there is always a small probability that the results are wrong. Sometimes there are underlying reasons for the test to be wrong. It is wise to do a test more than once, to increase the probability of a correct result.
When you have a test that can say ‘Yes’ or ‘No’ (such as a medical test), you have to think:

(Remember that an incorrect result is usually very unlikely.)
e.g.  Worked example 8
A laboratory tests people for a virus, using a screening test. This is a quick test that works in about 5 minutes.
There is a 0,4% chance that this test will produce a false positive. This means that 99,6% of the time a positive result will indicate a true positive result. The test is therefore 99,6% accurate.
So if a person gets a positive result, a second test must be done to determine if the person does really have the virus.

When an athlete takes a drug test, two samples are taken. If the first sample (A) tests positive for drugs, but the athlete believes the test is giving a false positive, they can choose whether to have the second sample (B) screened as well.
Read the extracts from newspaper articles and then answer the questions that follow.

1. Read the news article extract carefully and answer the questions that follow: 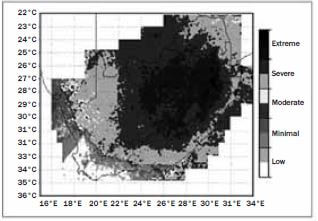 Before 2006, the SAWS (South African Weather Service) was unable to measure lightning activity over South Africa. This limited the SAWS in both its service delivery and public good. This inability changed with the installation of a lightning detection network (SALDN), which enabled the SAWS to explore lightning activity for the first time. These data provide South Africa with the first lightning climatology, based on data for more than a year, measured by the new state-of- the-art SALDN.
Analysis of the maps shows that the highest concentrations of lightning are found over the central to northern interior of the country, with extreme risk areas along the northern escarpment extending from the northern parts of KwaZulu-Natal into the Mpumalanga Lowveld. Almost the entire country is at severe risk from lightning in general. Only towards the west of the country does the concentration of lightning, as well as the lightning risk, decrease.