A theory is an explanation of something that has been observed in nature which can be supported by facts, generalisations, tested hypotheses, models and laws.
A hypothesis is a possible solution to a problem.

The genotypes and therefore phenotypes (appearance) of individuals of the same species are different from each other because:

10.3 Theories of Lamarck and Darwin

Charles Darwin explained evolution in terms of natural selection which states that: 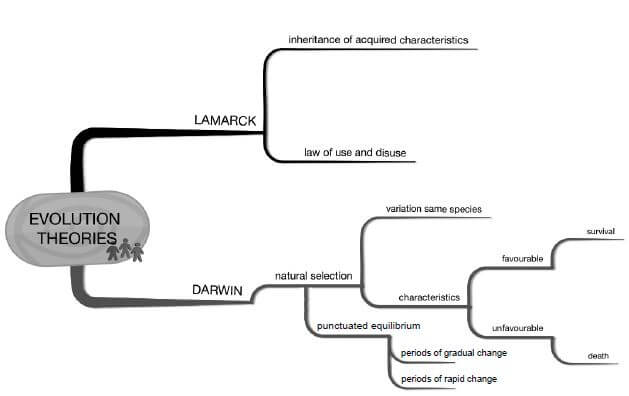 10.4 Applying the ideas of Lamarck and Darwin

Figure 10.1 below shows a series of changes involving cacti plants over a period of time. Some notes are included on the events at A, B and C.

Table 10.1 Darwin’s explanation for changes in cacti plants over time
The second column in Table 10.2 below states how Lamarck would have explained how modern cacti plants may have developed longer roots when compared to their ancestors with shorter roots. The first column contains guiding questions that will help you answer other questions on Lamarck’s theory using any other example, for example the development of longer necks in modern giraffes.

Table 10.2 Lamarck’s explanation for changes in cacti plants over time

Table 10.3 The differences between natural selection and artificial selection

Based on the explanations of Lamarckism and Darwinism, it is thought that evolution takes place through an accumulation of small or gradual changes that occur over a long period of time.  This is supported by the many transitional fossils in the fossil record which show the progressive change over time.
Punctuated equilibrium is a hypothesis that explains the speed at which evolution takes place through natural selection:

As a result of natural selection taking place over a period of time, the characteristics of organisms may change to such an extent that they cannot reproduce with the original members of that species to produce fertile offspring. We say that they have become a new species. This is called speciation.
We can describe the process of speciation as follows:

1. Use the information in Figure 10.3 below to explain how a new species of rabbit has arisen because of a geographical barrier. [9]

Figure 10.3 Speciation in a rabbit population

2. The diagram below represents the changes in a population of bacteria over time as a result of exposure to an antibiotic over time.

Figure 10.4. Development of antibiotic resistance in a bacteria population
Explain, in terms of natural selection, the shift in the resistance level of the bacteria illustrated above. [8]

So far in this chapter you have seen that:

Natural selection and speciation can also be used to explain how humans have evolved.
Scientists identify trends in human evolution by comparing humans to other primates in terms of similarities and differences. The differences point to the existence of different species, while the similarities point to a possible common ancestor. 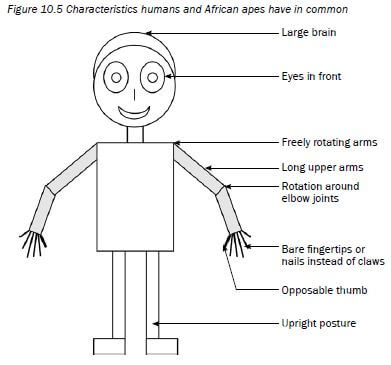 Table 10.4: The anatomical differences between humans and African apes.
Now try this:
1. Study the differences listed in Table 10.4 above by referring to the These are easy features shown in Figure 10.6 below. 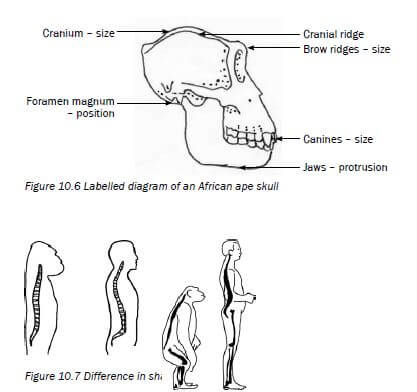 2. Now write down the differences using the above diagrams but without referring to Table 10.4.

Question 1
Study the two skulls shown in Figure 10.8 below and answer the questions that follow. 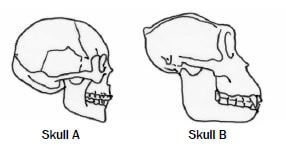 Question 2
The diagrams in Figure 10.9 below represent the skulls of three organisms:
Taung  child (Australopithecus  africanus),  a  modern  human (Homo sapiens) and a gorilla (Gorilla gorilla). The arrow indicates the position of the foramen magnum (the opening that allows the spinal cord to connect with  the brain). Study the diagrams and answer the questions that follow:

Figure 10.9 Skull diagrams showing the position of the foramen magnum

2.1 Identify the organisms that are represented by each of skulls A, B and C.   (3)
2.2 Assuming that the diagrams were drawn to scale, list THREE observable differences between the skulls of organisms A and B.    (6)
2.3 By looking at the position of the foramen magnum (indicated by  the arrows), state which TWO organisms are best adapted for walking on two legs rather than four legs. (2)
2.4 Explain, using observable features, why the organism to which  skull C belongs can be regarded as a transitional species (a species that is in the process of changing). (3) [14]

10.8.3 Major phases in hominid evolution
The table below shows the characteristics of different organisms (as obtained from a study of their fossils) that are thought to be in the same line that led to the evolution of modern humans. The fossils are dealt with in the order in which they appeared on Earth (as calculated by the age of the fossil using dating techniques).

1. There is a gradual change in the characteristics✔ over a period of time. ✔ (2)
2. 2.1 Brain size: Increase✔ in brain size✔
2.2 Position of foramen magnum: Movement to a more✔ forward position✔
2.3 Prognathous jaws: Change from more prognathous✔ to less prognathous✔
2.4 Dentition: Decrease in the size✔ of the teeth✔ OR decrease✔ in the size✔ of the canines
2.5 Development of brow ridges: Brow ridges become less✔ developed✔ 5 × 2 (10)
3. 3.1 Brain size: Increased brain size allows for processing information more quickly ✔and for processing a larger amount of information. ✔
3.2 Position of foramen magnum: More forward position of the foramen magnum✔ indicates bipedalism. ✔ A decrease in the length of the arms indicates a decreased dependency on its use in locomotion and therefore shows a more advanced stage of bipedalism. This is usually accompanied by an increase in the length of the legs.
3.3 Prognathous jaws: A less prognathous jaw indicates a smaller jaw. ✔ A small jaw is sufficient since there was a change from eating raw food to eating cooked food. ✔
3.4 Dentition: The change from large to smaller teeth✔was due to the change in diet from raw food to cooked food✔
3.5 Development of brow ridges: Brow ridges became less developed since the action of the smaller jaws✔did not create forces great enough for the skull to have increased strength from the brow ridges✔   5 × 2 (10)
4.  The information in the table shows that fossils of the different  organisms that are considered to have existed in the same line as humans✔ were all found in Africa. ✔   (2) [24]

10.8.4 Out of Africa hypothesis
The ‘Out of Africa’ hypothesis states that modern humans originated in Africa and then migrated out of Africa to the other continents.
The following lines of evidence have been used to support this hypothesis: 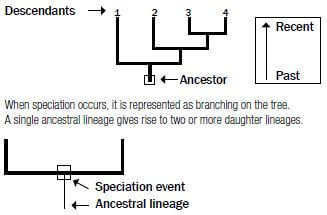 Questions
Let us look at the type of questions that can be asked about this phylogenetic tree:

Study the phylogenetic tree in Figure 10.11 below and answer the questions based on it. 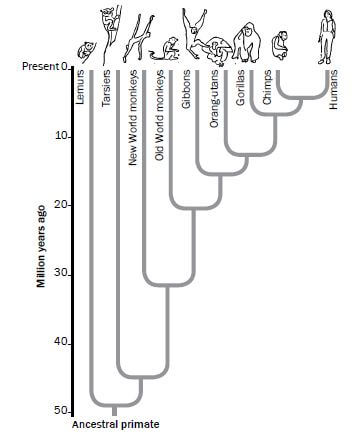 Question 1
Give the correct biological term for each of the following descriptions. Write only the term next to the question number (1.1 to 1.17).
1.1   The development of new species from existing species.
1.2   A study of the distribution of organisms in different parts of the world.
1.3   Similar structures in different organisms indicating common ancestry.
1.4   Having a pointed face because of projecting jaws and nose.
1.5   A group of similar organisms that can breed to produce fertile offspring.
1.6   A group of organisms of the same species that occupy a particular habitat.
1.7   Only organisms with favourable characteristics survive.
1.8 Using parents with particular desirable characteristics to obtain a combination of these desirable characteristics in the offspring
1.9    An opening in the skull through which the spinal cord passes
1.10 Locomotion involving the use of a pair of hind limbs only
1.11 Mechanisms that prevent different species from reproducing with each other
1.12 The study of fossils which provides evidence for evolution
1.13 Sudden change to the genetic composition of an organism
1.14 Branched diagram showing evolutionary relationships among organisms
1.15 Remains of organisms that have existed in the past
1.16 Genus to which Little Foot, Mrs Ples, Karabo and the Taung Child belong
1.17 Genotypic and phenotypic differences among organisms of the same species [17]